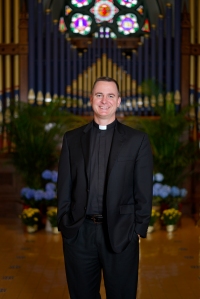 Fr. Derek Anderson, S.O.L.T., S.T.L., Fellow of the Principium Institute, is a priest of the Society of Our Lady of the Most Holy Trinity and presently serves as pastor in Dover, New Jersey. He is also an S.T.D. candidate. From 2011 to 2016, he was the Director of the Office of Catechesis for the Diocese of Paterson and a senior staff member at St. Paul Inside the Walls Catholic Center for Evangelization.

After studying at the Pontifical University of Saint Thomas Aquinas in Rome, Father Anderson was ordained a priest in 2003 by Pope Saint John Paul II. During his twelve-year tenure in Rome, he earned an S.T.L. in Dogmatic Theology and continued his research while writing his dissertation in the area of ecclesiology. His first pastoral assignment was to a parish in the Diocese of Rome, where he served for five years as parochial vicar. He has also served in a variety of capacities within his community, including Secretary of the General Council, member of the Constitutional Commission, and seminary formator in the S.O.L.T. Theological House of Studies in Rome.

Father Anderson has published articles in The Catechetical Review, including “Pope Francis and the Evangelization of Ecclesial Structures” and “Spiritual Aridity: The Path to Spiritual Maturity”. He has been invited to speak at both diocesan and university conferences.